In the south of Pont-à-Celles a hamlet is called La Chaussée. It is pretty sure that this name has come from the former Roman Road which connected Bavai to Cologne. Still further south the Autoroute de Wallonie (Wallonia Motorway) has replaced it nowadays, leaving some of its tracks in certain places, as if to allow us to go back in time.

Moreover at the place where rue de la Chaussée and rue de Courcelles cross, we can also, so to say, cross over times: the asphalt disappears to be replaced by earth and suggests leaving our car for a while and walking along the narrow winding way between the fields and the wood, beyond which Ferme de Courriaulx suddenly appears.

the first scientific research about Courriaulx’s past was carried out by historian Stephan VAN LANI, ABDIJ VAN 'T PARK - Pachthoeven en landbouw domein, Leuven, V.Z.W., Vrienden van de Abdij van't Park, 1999,extracts of which were translated by Michèle Heck for issues 82 and 83 of the magazine CELLA.

Several theories have been developed about the origins of Courriaulx, but we won’t tell you about all of them as they weren’t based on any historical traces. The first of those theories dates back to the end of the 12th century. But the first scientific research about Courriaulx’s past was carried out by historian Stephan VAN LANI, ABDIJ VAN 'T PARK - Pachthoeven en landbouw domein, Leuven, V.Z.W., Vrienden van de Abdij van't Park, 1999,extracts of which were translated by Michèle Heck for issues 82 and 83 of the magazine CELLA. We have referred to those extracts on the present site.

2. Period of tenant farming depending on the church.

From the 13th to the 16th century, the peaceful period

A charter of 1205 by Duke Henry of Brabant confirms that Jehan, lord of Traleis (Traulée) sous Celles left to the abbey of Parc in about 1185 'on his own free will and in agreement with his wife and his son, for the salvation of his soul and those of his ancestors', around 50 hectares located in Traulée, thus renouncing all the rights he had on the farm of Courriaulx. in favour of Parc.

The Prémontrés - canons following the rules of St Augustine - who went to live in 1129 in the parc and the hunting lodge of Duke of Brabant Godefroid-le-Barbu, not far from Louvain, managed the property, of which the provost had to handle to the abbey a part of the farm income in the form of money, grain, wool, leather, fabric, cheese, pig and sheep ; another part was to pay for the clothes and food of his brotherhood, the wages and food of the farm workers and servants and the maintenance and repairs of the buildings, carts, ploughs, harrows and other instruments, as well as the food for the livestock.

However, we read in the same article that 'Duke Jean II of Brabant granted Courriaulx a charter which exempted it from providing horses and carts for the Duke'. But soon the number of lay brothers grew down and Parc rented its farm properties to laymen for periods of 6 to 9 years. In Courriaulx, this system started as early as 1315.

In the 17th and 18th centuries, in the maelstrom of wars.

The farm, which was an easy prey due to its location, was deserted from 1672 to 1674 : the soldiers of Prince de Condé, who had settled in Trazegnies, kept looting the region. It was only in 1678 that, thanks to the peace treaty between France and the United Provinces, it was possible to start repairing the buildings and working in the fields that had been let lying fallow for so long. That was the reason why Parc exempted the farmer from paying his rent and rented about 50 hectares of grounds from the Corréal Estate to other people. At the end of the 17th century the surface of the estate eventually reached 146 hectares again and the plots of land that had been sublet were recovered.

With the end of the War of the Spanish Succession (1713), abbey farms flourished again. Jacques Hauchamps et Marie-Philippine Ghison, who were the tenants of the farm at that time, carried on restoring works (the dated stone with armorial bearings which is still visible, as well as the main building date back to that period). They also had to pay fifty percent less for their farm rent because they had lost a large part of the crops due to mice.

However, in 1744, because of the War of the Austrian Succession, French soldiers who were passing through the region took the crops gathered for winter. For eight years, the couple still managed to stay there and then were replaced by Albert Joseph Liégeois and his wife Isabelle Sibille. At that time the rent cost 1418 florins per year. Albert Joseph Liégeois was indeed the mayor of Nivelles and was not only the farmer of Grand Courriaulx : he also collected the tithe in the village of Celles. Until 1771, when Pierre-Jacques Navarre replaced him, other works also took place : a sheepfold was built, stone buttresses and pilasters were erected to support the large barn, and the horse-stables and cowsheds were also improved. Then in 1774 Jean-Baptiste Navarre stepped into his brother Pierre-Jacques’s shoes. 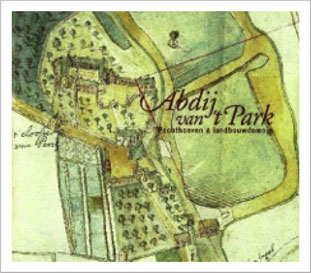 Map of the Abbaye du Parc’s property dating back to the 13th century.

That happened five years before the end of Ancien Régime : the political power, coming after the revolution of 1789, suppressed the catholic religion and confiscated all religious goods. Like all the abbey farms of Parc, Ferme de Courriaulx became officially considered as a national property and put up for auction. The expert report by Jean-Baptiste Courtin gives us the following description of the property : a farm called Courriau, consisting of a tile-covered house, ready for the use of the aforementioned good and in quite a good condition but requiring a few repairs and containing six rooms, a chapel, a bake-house, cellars and attics, a barn, five horse-stables, four sheepfolds, several pigsheds, a cart-shed, two wells and a garden. It was divided into 6 plots, but the whole was bought by citizen Emmanuel Quintart, a former Capuchin monk from Namur (18th Germinal of year V, that is 7th April 1797).

Up to now we haven’t found any tracks of the following years, until 1835 when somebody from Brussels bought the property. His heirs sold it in 1942, after an attempted fire of the nineteenth-century barn by French troops. The buyer was Alfred Dupont, a financial speculator who used to invest in farms and lands (he is said to have acquired up to twenty-two farms). Even though the Allies damaged the barn again at the end of the Second World War (1945), he did not sell the property but rented it out to Dorsan Neirynck from November 1945 onward.

Dorsan was a refugee from Tielt (West Flanders). He felt so good in Pont-à-Celles that he stood in the municipal elections and took office several times as a deputy burgomaster. After 28 years living on the farm, a few months before his right to retirement, he heard that Mr Dupont's heir wanted to sell the property. He was first disconcerted but soon suggested to his daughter Marie-Jeanne and his son-in-law Daniel they bought the farm. Meanwhile, he made arrangements for the 73-hectare land and meadows to remain part of the property. The couple was the first to be both the farmers and owners of Courriaulx. They still work on it nowadays, owning 100 hectares of land and an average of 120 bovids.

The picturesque farm has overlooked for ages the small valleys in the North of Charleroi. That is the conclusion of Stephan VAN LANI' s study, which ends this way : History has been hard but generous with the farm and its inhabitants. Several rebuildings were made, often as a consequence of wars and looting. They have shaped the current aspect of the old abbey farm.